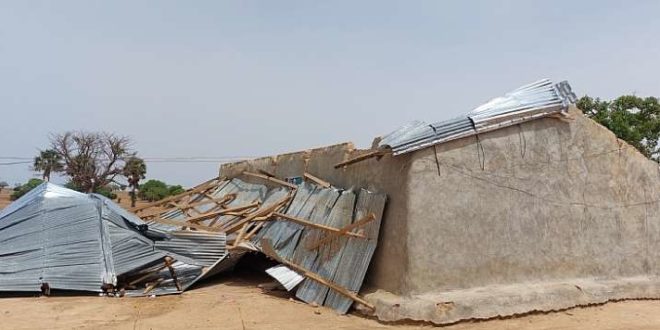 One killed, properties destroyed, many displaced by rainstorm in Bawku West

A violent rainstorm has killed one, destroyed many houses and rendered some residents homeless in the Bawku West District of the Upper East Region.

The Atarikom Primary school and Tilli primary, for instance, had their roofs ripped off with some wooden panels broken.

Kusanaba Senior High School administration block which was ripped off in 2021 by similar rainstorm is still yet to be reroofed.

Speaking in an interview with Pastor Joseph Alalba, Church of God Ghana, Sapalugu branch, he said the incident happened on Thursday 7th April, 2022 around 5:00 pm.

According to him, there was a funeral being performed around the church when the wind struck. The situation compelled funeral attenders to run into the church for safety.

He added that the church was not spared either as the roof was completely ripped off.

He noted that the situation compelled them to run out but later realised another person was trapped in the church.

Meanwhile, the NADMO Director in the Bawku West, Daniel Anania Atampuba told this reporter that he visited the community and has tasked all his zonal directors to take records of the damage.

He, however, urged the people in the district to plant more trees around their homes to serve as windbreaks to avoid such destruction in the future.