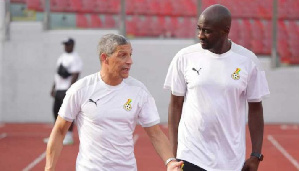 Otto Addo or Chris Hughton: Who becomes the next Black Stars coach

With a little over six months left for the 2022 World Cup to come off, the Ghana Football Association are in a hurry to appoint the next coach for the Black Stars.

The Black Stars are currently without a coach after the short-term deals offered Otto Addo for the doubleheader against Nigeria ended.

The FA will now have to identify a coach who will lead the team to Qatar with the stars looking to impress upon their return to the global football showpiece.

As per reports, the FA will be making a choice between Chris Hughton and Otto Addo, both of whom were key in the qualification.

Prior to the games against Nigeria, it was reported that Chris Hughton was the pick of the both government and was going to assume the role permanently once the qualifies were done.

According to reports, Otto Addo’s presence on the technical team was a compromise between the government and the FA as the latter favoured Otto Addo.

Following the success of the Black Stars in the play-offs against Nigeria, which according to sources was largely due to Otto Addo’s tactical brilliance, the FA and government as announced by President Akufo-Addo are having a re-think of the earlier arrangement.

The FA have long liked Otto Addo and felt vindicated by his performance in the two games against Nigeria.

The headache however is convincing Otto Addo to vacate his position at Dortmund and take the Black Stars job on permanent basis.

Otto Addo, reports indicate did not accept the assistant coaching job permanently under Milovan Rajevac due to lack of job security with regards to the Black Stars.

Should he be the choice of the FA, they will not have to sell the project to him and convince him that there will be form of interference in his work.

Between the two coaches, Chris Hughton is the more experience, having coached in the Premier League, championship and acted assistant for Scotland.

Otto Addo is on the other hand seen as a rising star whose knowledge of the game is up there with very best and could become one of the best Ghanaian coaches.

Speaking on the issue, the Communications Director of the Ghana Football Association, Henry Asante Twum said the FA will soon announced the new Black Stars coach.

“I do not think it will take much time. They are in communication with the individuals concerned, having regular discussions with their employers, and many factors are being considered. But, again, the government of Ghana is the employer of the coach of the Black Stars and here is the case where we had four coaches qualifying us for the World Cup.” he told Kumasi based Luv FM in an interview.

“In terms of contractual engagement, a lot will go into it, so it’s tough to discuss these things. So, engagements are still ongoing, and I’m sure we will communicate our position as soon as a decision is made,” he said.