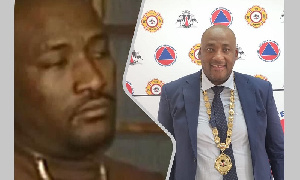 ‘The taxpayer looked after me in jail’ – South African mayor rejects salary, perks

A new mayor in South Africa has pledged that he will not take salary and other perks of office.

Gayton McKenzie of the Patriotic Alliance (PA) party, was recently sworn in as mayor of the Central Karoo district municipality in the Western Cape province.

In his inauguration speech, he stressed that nothing from public coffers would be spent on him during his tenure.

In giving reasons for his decision, Gayton cited how the state took care of him during his time in jail.

A tweet announcing is decision read: “I will donate 100% of my salary, I don’t want Mayorol cars, it should be sold and ambulances bought, I came with my own bodyguards paid by me, the police should go do police work. I will never claim a cent in petrol or flights. The taxpayer looked after me in jail, I am free now.”

Local media outlets report that he used personal funds to pay for the food eaten at his inauguration.

Mr McKenzie promised to intensify the fight against illegal immigration.

He served seven years of a 15-year sentence for armed robbery after being arrested in 1996. He was released from prison in 2003, the BBC Africa LIVE page reported.

Tags after IN JAIL looked me taxpayer THE

Previous VIDEO: One dead, four injured in Tempane rainstorm
Next Otto Addo or Chris Hughton: Who becomes the next Black Stars coach