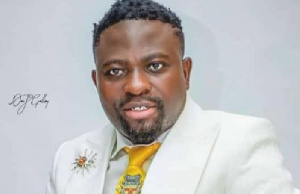 Our lovemaking woke my mother-in-law up – Brother Sammy

Brother Sammy reveals his wife brought him luck after their marriage

Ghanaian gospel artiste, Samuel Opoku, popularly known as Brother Sammy, in a recent interview on Angel FM recalled that on his wedding night, his mother-in-law thought he was beating the wife while they were making love.

According to Brother Sammy, he spent the night in his mother-in-law’s house with his wife after their wedding ceremony but the mother-in-law was awakened by their love-making.

“While making love to my wife, my mother-in-law probably thought I was beating her daughter or armed robbers had entered the house, so she came to check out what was going on, only to realize it was nothing bad,” he said in the interview.

Brother Sammy also added that his wife who grew up in Europe was loud whenever they made love and had mentioned in an earlier interview that his wife brought him luck after their marriage.

“I have been married for ten years. I have performed a traditional marriage,” he said. “I wasn’t popular when I married my wife. I had my first hit [song] after marrying my wife. So, my wife brought me luck.”

Previous I received GH¢40,000 from Office of Chief of Staff before Bawumia’s GH¢50,000 – TT
Next Hawa Koomson slays at son’s wedding