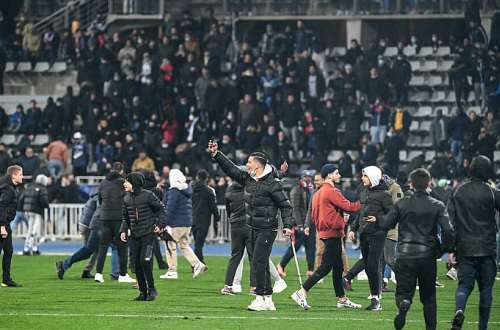 French football chiefs slung Paris FC and Lyon out of the Coupe de France on Monday night and fined the outfits 10,000 and 52,000 euros respectively for the chaotic organisation of their last-64 tie at the Stade Charlety on 17 December.

Fans marauded between the stands and spilled onto the pitch as smoke flares were hurled at seats containing hundreds of children.

The match was eventually abandoned 50 minutes after the half-time pause with the score at 1-1.

In the aftermath of the game, the Lyon president, Jean-Michel Aulas, claimed that fans from Paris Saint-Germain had provoked the Lyon faithful.

His assertions appeared to have been well-founded after the arrest last week of three men with ties to PSG fans groups.

Monday’s meeting of the French Football Federation’s disciplinary committee said responsibility for the ugly scenes lay with both clubs and they were expelled from the tournament.

In addition to the fine, Paris FC was ordered to play its next five home games in Ligue 2 behind closed doors.

Lyon’s punishment included cash to pay for the seats at the Stade Charlety that were destroyed by their fans during their frenzied rampage. Lyon’s bosses were told fans would have to behave impeccably during next season’s competition or the club would be eliminated again.

“The Coupe de France is a competition that all players want to win,” said former Lyon defender Manuel Amoros on French broadcaster RMC.

“It’s a shame for Lyon because they had a team that had the ability to win the cup … but clearly they can’t control their fans at the moment.

“The sanctions seem to be hard but fair though I think the fines could have been more substantial to really show that the federation means business.”

As a result of the FFF decision Nice, who were drawn to play the winner of the match, will advance to the last 16.

Related Topics:FANShaltLYONParis FC
Up Next