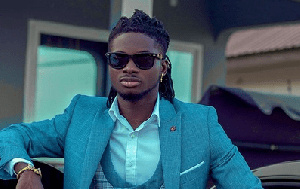 Pat Thomas, Kuami Eugene, others to perform at Kotoko coronation

Asante Kotoko will play Elmina Sharks in a coronation match on Sunday, June 12, 2022, at the Baba Yara Sports Stadium.

Kotoko will be officially handed the Ghana Premier League trophy after emerging as champions of the 2021/2022 season.

The Porcupines have rolled out several activities that will take place before and after the coronation match on Sunday.

As part of the many activities, four big artistes have been lined up to perform at the event to entertain the fans.

The club announced that a celebrated Radio personality and a fan of the club, LUVING C will be the moderator for the event.

Here are the artist on the bill for the event

The high-life musician. Pat Thomas is a fan of the club and he composed the official ‘Kumasi Asante Kotoko’ song.

The 76-year-old will grace the occasion and perform.

The multiple award-winning artist will also perform at the coronation. Kuami Eugene is a staunch Kotoko fan and is expected to turn up the supporters with his many hits.

The Gospel musician will also perform as the team look to give gratitude to God for seeing them through the season.

African Child is a Kumasi-based artist. He is expected to light up the stadium with his shit sing ‘Kumoo’.