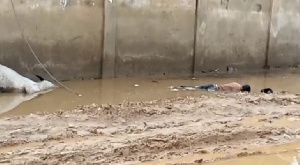 A high-tension cable fell into a clogged water area leading to the electrocution of a man and a cow at an area in Accra known as Railways after Friday’s downpour.

The man is said to have been electrocuted between the hours of 8 and 9 pm on Friday.

Residents blocked the road leading to the clogged water area to prevent others from falling victim since many did not have knowledge of the incident.

According to the residents, efforts to reach the Electricity Company of Ghana (ECG) after the incident, proved futile.

Officials from ECG, however, visited the area later to disconnect their power supply

A resident of the area is reported by JoyNews to have said that “Around 8 pm yesterday, we heard someone shouting that somebody has been electrocuted so we came out to check. We saw someone lying in the water and also saw that one of the high-tension cables had fallen into the water – the electric shock killed him.

“We did not touch him but rather blocked the road to prevent others from passing there. We don’t know him [the deceased] but someone says he is from Konkomba. We retrieved his phone, his bag, and some money that were in his pocket.”

They further appealed to the government to fix their deplorable roads and faulty electricity poles and cables.