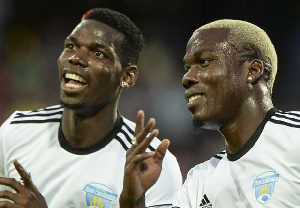 Mathias Pogba, the elder brother of France and Juventus midfielder Paul Pogba, has been detained for questioning by French police officers after he was accused of playing a role in extorting money and blackmailing the Juventus footballer.

Mathias is reported to have handed himself for interrogation by the police on Wednesday afternoon but was detained later on by the investigators with three other suspects.

The interrogation of Mathias follows after Paul told police in Paris that he had been a target of extortion and blackmail by childhood friends in March.

The former Manchester United player claimed that he was forced to pay €100,000 (£85,000) to gunmen who escorted to a flat in the eastern Paris suburb of Roissy-en-Brie.

Mathias Pogba upon probing denied the allegations leveled on about extorting money from his brother.

“Taking into account how the affair has evolved and the huge media attention surrounding it, Mathias Pogba strongly insists he knows nothing about any extortion attempt against his brother, Paul Pogba,” a statement by Mathias’ lawyer read.

He added, “It is clear that the difficulties the Pogba family are experiencing are the result of outside threats which the justice authorities, who are already involved, will evaluate. Mathias Pogba, who wishes above all to calm the situation with his brother, will from now on only speak with the investigating magistrates, should it be necessary.”

The elder brother of Paul in a post on social media vowed to take on his younger brother and disclose ‘great revelations’ about Juventus player after their issues went viral on the internet.

Mathias Pogba claimed that Paul asked a witch doctor to cast a spell on PSG star, Kylian Mbappe. However, Paul Pogba denied the allegations claiming Mathias wanted to discredit him.

Kylian Mbappe on the other hand as also told the French press that Paul Pogba has reached out to him and have settled their had differences.