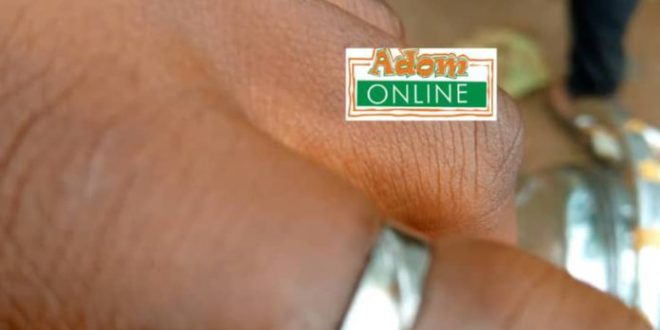 A 25-year-old woman, Evelyn Detordzi, nearly lost her finger after wearing a ‘promise ring’ her fiancé gave her.

According to Miss Detordzi, who resides at Sehwi Benumsuo in the Bodi District of the Western North Region, the man put the ring on the wedding finger.

“I don’t think he had any evil intention or invoked anything before giving me the ring because we were going to get married soon,” she said.

Speaking to Adom News‘ Augustine Boah, she said her pastor warned her not to wear the ring until prayers and fasting are performed.

She, however, disobeyed and wore the ring but couldn’t sleep throughout the night as she was in severe pain, only to wake up with a swollen index finger.

She said she cannot fathom why the ring was outgrowing into her flesh and bones with the skin almost gone.

All efforts to remove the ring with soap proved futile despite help from a pastor who prayed and applied a cream on the finger.

She stated they succeeded in removing the ring at the hospital.

Previous Aisha Huang gate: Akufo-Addo appointees who are ‘under pressure’ to resign
Next Addi Self Lauds Ambassador Alhaji Salamu Amadu For His Illustrative Life Style