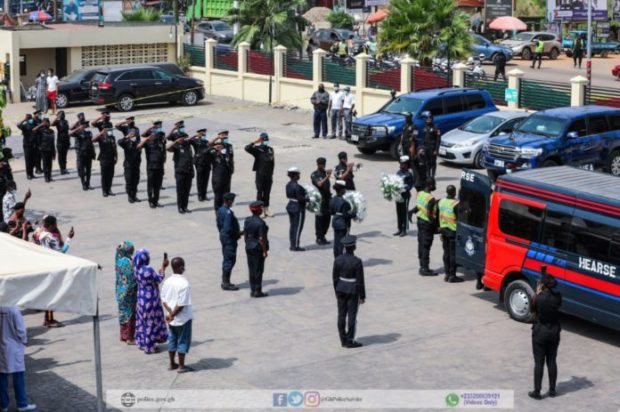 The solemn ceremony, which was conducted in line with Islamic rites, took place at the Transitions Funeral Home, Haatso and was attended by the Inspector-General of Police (IGP), Dr George Akuffo Dampare, members of the Police Management Board, Senior Police Officers and bereaved family members.

The IGP, Dr Dampare, on behalf of the Ghana Police Service, commiserated with the bereaved family and pledged that the Police Administration will do everything possible to bring the perpetrators of this heinous crime to justice.

Other Senior Police Officers took turns to offer words of condolences to the bereaved family and gave the assurance of their preparedness to offer the necessary assistance to them.

The late General Constable Adams Sulley was later buried with full Police honours at the Awudome Cemetary, Accra, after a procession from the Transitions Funeral Home, Haatso, through some principal streets of Accra.

General Constable Adams Sulley was murdered together with his patrol colleague officer on Wednesday, December 15, 2021, while on patrols.