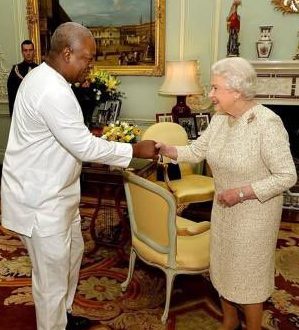 The Queen of England, Queen Elizabeth II died on Thursday, September 8, 2022 at age 96.

She died at Balmoral with members of the royal family by her bedside.

Queen Elizabeth is the longest serving Monarch in the history of the United Kingdom having ascended the throne in 1952 at age 25.

The Queen has met several world leaders since she ascended the throne.

We bring you the four John Presidents of Ghana who officially met with the Queen of England.

In 2009, the Queen welcomed the Ghanaian President into her palace. The visit was on the request of the Queen after Prof Atta Mills won the election to lead Ghana.

He used the opportunity to further strenghten the ties between both countries.

On her second visit to Ghana in 1999, the Queen was accompanied by her husband Prince Philip. They were welcomed by President Jerry Rawlings  at the airport as thousands cheered. During her visit, the Queen held talks with Rawlings, addressed Ghana’s parliament and attended a colourful Durbar, meeting of traditional tribal chiefs.

Previous Nigerian gives birth at 33,000ft on flight from Turkey to the UK
Next Pass anti-LGBTQ+ Bill by October ending or we hit streets – Pentecostal Council to Parliament