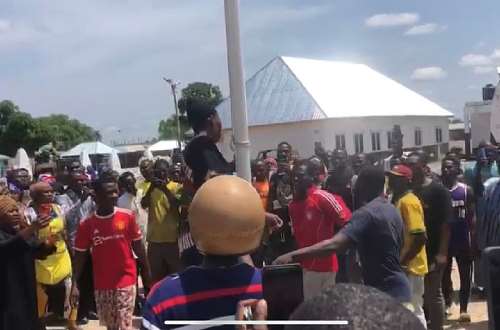 The Ghana Police Service have arrested three men in the viral video who were spotted flogging two people captured in a sex tape at the Wa Naa’s palace.

According to the police, the suspects were arrested with the support of the Wa Naa and some community members and will face the full rigor of the law.

“The Police have arrested three (3) persons in connection with a viral video in which some people were seen publicly flogging two people the forecourt of the Wa Naa’s Palace. The suspects, Sidiki Osman, Bushiran Knigir and Issahaku Mahama, were arrested with the support of the Wa Naa and some community members. The three will be taken through the due process of the law,” a statement shared by the police on Facebook on June 1, 2022, read.

The statement added that “the Police are pursuing the remaining suspects to arrest them to face justice.”

A viral video of the flogging incident showed the victim tied to a pole as two men flogged her in front of the palace of the Wa Naa in the Upper East Region.

The footage received condemnation from some people citing a clear abuse of power, while others called on the police to take action and bring the perpetrators to book.

Meanwhile, the latest from the Wa Naa, whose forecourt was used for the flogging is that the action was not sanctioned by the overlord or anyone from the palace.

Naa Kadri Ibrahim, Jinpehi Naa, the Wa Naa’s spokesperson told the Ghana News Agency (GNA) that the incident happened at a time the Wa Naa was not around.

He added that none of the principal chiefs was also around saying, “Whosoever took that decision to have them flogged has erred and must be arrested and brought to book.

“The position of His Majesty, Wa Naa, and for that matter, the palace, is that that is an unfortunate incident and we condemn the act of flogging and we are going ahead to collaborate with the police to see how professionally, they will go about it.