Home / CRIME & PUNISHMENT / Police gun down two robbers in gun battle at Bekwai, one arrested with 2 on the run 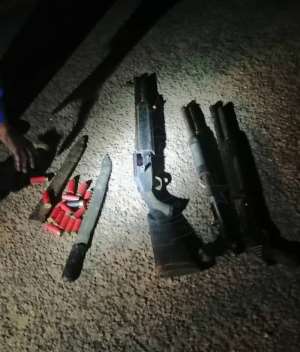 Police gun down two robbers in gun battle at Bekwai, one arrested with 2 on the run

After a gun battle on the road from Abodom-Koniyaw, near Bekwai where the robbers had blocked the road with wooden logs to rob some market women, the Police also managed to arrest one of the suspects.

“On 2nd March 2022, the Ashanti Regional Police Anti-Robbery Squad during an intelligence-led operation, engaged a group of five robbers who had blocked the road from Abodom – Koniyaw, near Bekwai with wooden logs to rob some market Women.

“In the process of Police engagement with the robbers, two of them were shot, one was arrested and two others who might have sustained gunshot wounds managed to escape and are being pursued,” a Police statement said on Wednesday.

The Police say after investigations, it has learned that the gang of robbers is the same gang that asked for prayers from victims after an operation on February 21, 2022, on the Takoradi-Kumasi highway.

“Preliminary investigations have established that this gang of robbers on Monday, February 21, 2022, had blocked the road at Anwiankwanta and robbed passengers on board a Takoradi-Kumasi bound VIP bus. After subjecting the passengers to the harrowing experience, the robbers were reported to have then called on their victims to remember them in their prayers,” the Police statement adds.

It reveals that some of the exhibits retrieved from the scene of Monday’s gun battle with the armed robbers include a Mazda mini bus with registration number AK 179 – 19, face masks, cutlasses, three pump action guns all loaded with AAA live ammunitions, and 30 spare AAA ammunitions.