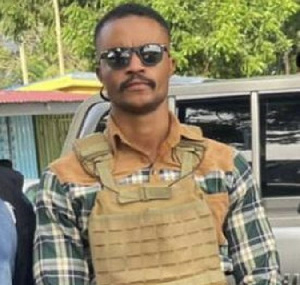 After a turbulent period between the Ghana Police Service and the Nyames, the body of late Lance Corporal Stephen Kwaku Nyame has been released to the family for burial.

It would be recalled that in March 2022, the Police Administration informed the public of an intelligence-led raid conducted near Ashaiman that led to the death of two officers, one of whom was Mr Nyame.

“The police have carried out an intelligence-led field raid at a hideout of the gang connected with the investigation into the bullion van robberies.

“During the raid at Borteyman near Ashaiman, there was an exchange of gunshots and two policemen, Constable Reindolph Gyimah Ansah and Corporal Stephen Kwaku Nyame who had been arrested in connection with the bullion van robberies were shot and were pronounced dead on arrival at the Police hospital for treatment,” part of the statement which was dated March 8, 2022, said.

The news was received with shock by the Nyame family who denied the alleged involvement of the deceased in any nefarious act.

They alleged that the police rather took Mr Nyame’s life out of envy, while they demanded the body of the late officer for burial.

Angelonline.com.gh is reliably informed that the body of the late Lance Corporal has been given to the family for interment.

Further information available on the website indicates that the Nyames have slated the funeral and burial rite of their beloved for June 11, 2022 at Nsawam.

Previous Here are the Cardinals from Ghana
Next ‘See comedy, the masons lost its relevance centuries’ – Afenyo-Markin trolled on Twitter