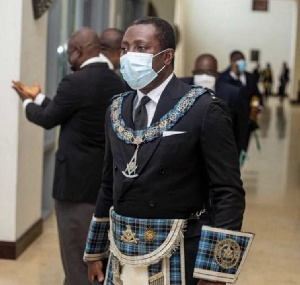 This was after a picture of him clad in freemason apparel surfaced online Sunday, May 29, 2022.

Years before this development, Mr. Afenyo-Markin, who is also the Deputy Majority Leader of the 8th Parliament of the Fourth Republic, had declared in an interview that he was a member of the freemason society.

He also refuted rumours he had been excommunicated by the Catholic church for joining the fraternal society.

“I am a mason and I have not been sanctioned by the Catholic Church. Freemasonry is a fraternal society that believes in God Almighty and follows certain principles that guide a man’s life and it does not run counter with my beliefs as a Catholic. President Kufuor is a mason and a catholic,” he told Bola Ray on Starr Chat in 2016.

Six (6) years down the line, the Effutu lawmaker is trending on Twitter after a picture of him in a mason’s attire was widely shared.

In a reaction on Twitter, United States-based Ghanaian journalist, Kevin Taylor trolled Afenyo Markin describing the development as a “comedy”.

According to the loudmouth broadcaster, freemasonry lost its relevance centuries ago. He said if the society forms part of the bedrock of the western world, the whites would not allow a “slave” to join.

“See comedy The masons lost its relevance centuries and who said the white man will allow a “slave” to join a society that somehow forms part of the bedrock of his nation? Today’s mason is a men’s fellowship to make the “slave” feel comfortable,” he wrote.

See comedy ???????????? The masons lost its relevance centuries and who said the white man will allow a “slave” to join a society that some how forms part of the bedrock of his nation? Todays mason is a mens fellowship to make the “slave” feel comfortable ???? pic.twitter.com/SIP3iMWzGM