Home / POLITICS / Politicians can lie too much – Muntaka Mohammed 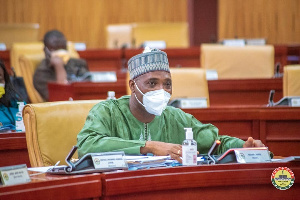 Politicians can lie too much – Muntaka Mohammed

Member of Parliament(MP) for Asawase in the Ashanti Region Alhaji Mohammed-Mubarak Muntaka has observed that politicians especially in Africa lie because of the pressure they have to go through.

“Most people do not trust politicians again. Fortunately, I’m a member of the Pan African Parliament and from my perspective, it will take us another century to develop.”

He continued “because of pressure we tell a lot of lies as Politicians and because of that turn over is very high. In all African Parliaments, the average turnover is one term. You can’t develop a country when Parliamentarians spend one term”.

Muntaka Mohammed indicated that since Parliamentarians are aware of the fact that they can be taken out of Parliament after just one term, they will rather focus on making all the money to secure their pension.

“We also lie too much as politicians. You lie to the people before you come to power. People enter politics without asking. There are MPs who come to Parliament and weep because they didn’t know what it takes to be Parliamentarians.”

To Muntaka Mohammed, it’s high time citizens scrutinize promises made by politicians in the country in order to help reduce the lies.