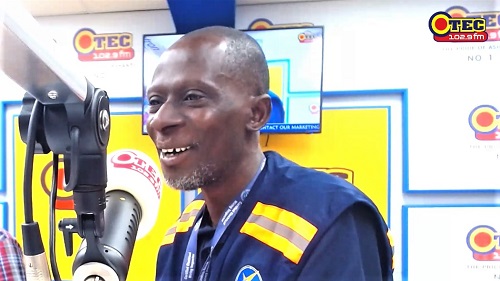 An Energy Expert Rev Dr Enginneer Agyenim Boateng has stated that bad electrical wiring causes electrical leakages, which leads to increase in energy consumption and unexpected hike in the electricity bill adding that over 70 percent of residents in the Ashanti Region are paying astronomical light bills due to the use of inferior materials for wiring.

He explained that when the wiring was full of joints, using sub-standard materials for wiring, coupled with poor work by the electricians, under size cable and over aged wiring , the insulation property worn out, which created heat in the system and caused the meter to read fast, leading to high payment of electricity bills.

Engineer Agyenim Boateng who is also a leading member of the Certified Electrical Wiring Professional Association of Ghana (CEWPAG) said this during a discussion on the Kumasi based OTEC 102.9 FM’s morning show Nyansapo on Thursday September 22, 2022.
High electricity bills

“Poor electrical wiring is expensive to maintain and also causes fire outbreaks, leading to lives and property”. Our checks on most of those complaining about this supposed high electricity bills either used unapproved materials or uncertified electricians for their wiring system”, he observed.

“Per my checks and experience over the years as a professional electrician, I can tell you that most households are paying unrealistic bills due to poor wiring and the use of inferior materials “, the  Energy Commission Inspector told host of the programme Captain Koda.

Some residents in the Ashanti Region have been up in arms against the government and the Electricity Company of Ghana (ECG) over outrageous electricity bills served them by the company.

The new billing system implemented by the electricity distribution company according to them has led to the collapse of several businesses with a large section of Ghanaians complaining that they will be forced stopped using electricity in their homes if nothing is done about the situation.
Electrical Wiring Regulations, 2011

According to him, the Electrical Wiring Regulations, 2011, L.I.2008 provides a guideline on who qualifies to undertake electrical wiring in the country.

Rev Dr Engineer Agyenim Boateng stated that regulation seven states that “a person shall not undertake electrical wiring on premises unless that person is certified by a licensed electrical distribution utility company or a recognised firm appointed by the Energy Commission.

He advised the public to always engage the services of a professional electrician certified by ECG, since most of the frequent fire outbreaks in the markets and houses were caused by poor electrical wiring.

He said electrical wiring whether for residential, commercial or industrial project must be carefully installed and maintained to provide safety to persons and property.

He however said while some of the citizens had genuine concerns, most of them are at fault.