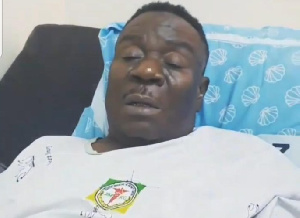 Wife of Nollywood actor, John Okafor popularly known as Mr. Ibu, has disclosed that her husband has been admitted to the hospital again.

Describing it as a situation that is fast becoming a trend, Mrs. Stella Okafor said this is the second time her husband has been rushed to the hospital on their wedding anniversary.

Prior to this development, Mr. Ibu was on a long hospital admission at the Zenith Medical and Kidney Centre in Abuja and this sparked rumours that the actor had given up the ghost.

After dispelling the said claims and later discharged from the hospital, Mr. Ibu in an interview with Nigeria’s Premium Times in March 2022, alleged that his ‘Village People’ tried to kill him twice through poison.

The Nigerian comic actor explained how he battled what he described as an unknown ailment for a long period.

“it’s a long story because the sickness didn’t start today, all these while we’ve been running around, going from here to there, from one diagnosis to another, mentioned different names of sicknesses, I was even tired of the results, how could all these aliments be in one person’s body,” he earlier stated.