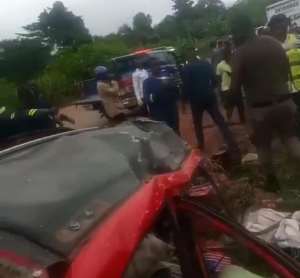 Three persons have died in a ghastly accident on the Sunyani-Techiman highway in the Bono Region.

It took rescuers from the Ghana National Fire Service (GNFS), Techiman Fire Station 5 minutes to arrive at the crash scene on Thursday to swiftly rescue 3 trapped victims involved in the accident after receiving a distress call at 12:01pm.

According to GNFS, its preliminary investigation revealed that the two drivers were trying to dodge potholes, hence the head-on collision.

Both vehicles suffered massive impact as three passengers onboard the Taxi car were pronounced dead upon arrival at the hospital with the help of the Police.

The driver of the Matiz Taxi and two others onboard the Hyundai Mini Truck who sustained various degrees of injury were successfully rescued by the crew and sent to the hospital for treatment.

Previous WATCH: King and siblings hold vigil by Queen’s coffin
Next I’m jealous of my brother sleeping with his wife every night – 30-year-old man confesses