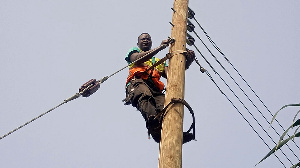 General Manager of the Tema region of the Electricity Company of Ghana, Ing. Emmanuel Akinie, has indicated that, as part of the company’s effort to solve the issue of power theft in the region, a number of customers were apprehended last year and billed over GH¢6 million.

“We were able to apprehend customers who were involved in power theft and an amount of GH¢6.2 million was billed,” he indicated.

According to the ECG, efforts to recover all losses in the region have been doubled in order to boost revenue collection.

In an interview with Joy Business in Tema, the General Manager, said “Some customers are paying by installment due to agreement with ECG. A chunk of the said amount has been paid and those involved are expected to finish paying by end of June this year.”

Meanwhile, Tema Region said it has been on the watch for any illegalities that have been going on over the years. This, it is doing through monitoring teams in the various districts in the region.

The duties of the monitoring teams include taking on suspected defaulters and handing them over to the police for investigations to be done.

However, three customers are being investigated by the police for illegal connection in 2021.