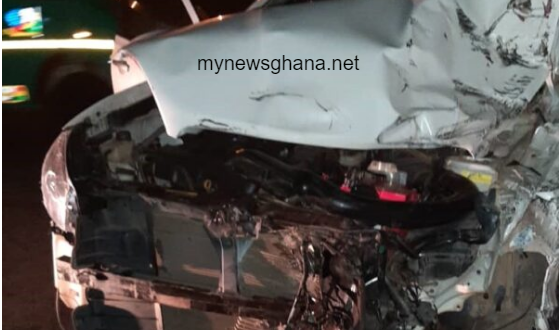 Prison Officer, Others killed In Fatal Accident At Akyem Asafo

A 49-year-old female Prison Officer and two others have all died in a deadly motor accident at Akyem Asafo stretch of the Accra to Kumasi Highways in the Eastern Region.

The deceased Prison officer has been identified as Faustina Bekoe. The others Juliana Nyanteh,63, a passenger and Thomas Agyare, 31, a pedestrian

According to Police sources available to MyNewsGhana.net, the accident vehicle – Nissan Urvan mini bus with registration number GW 7022 – 20 being driven by 53-year-old Barfour Asare, with passengers on board from Accra towards Nkawkaw direction.

However, on reaching a section of the road at Akim Asafo near Suhum on the Accra Kumasi highway, the driver alleged the rear offside tyre of his vehicle got burst hence lost control of the steering wheel and the vehicle knocked and killed the male adult pedestrian then crashed into a stationary Man Diesel truck with registration number GE 4129 X which was parked at a mechanic Shop at the roadside.

The female prison officer who was on board the vehicle died on the spot.

The bodies of the deceased persons have been deposited at the Suhum Government hospital mortuary for preservation and autopsy.