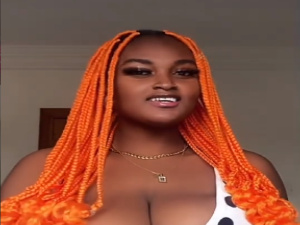 Peggy Lamptey, a Ghanaian TikToker and influencer, has opened up about her childhood trauma and how it contributed to making her a sex addict.

Peggy who was rapped before the age of 10 by a man who was close to her family became addicted to the act and with time, began exploring her body.

“I started having sex at Class Four, I was around 9 to 10 years. It wasn’t really sex, I started liking it, doing my own things…touching myself because I saw things early. When I was growing up everything was kinda complicated… I had control, I could do whatever I wanted to do.

“In my first sex, I was raped. I can’t say who it was but it was not a boyfriend or a teacher…It got to a point where I started feeling that something was missing because I was raped continuously by the same person. When I relocated to a new place I started missing it…it wasn’t my fault.”

In an interview with Vibes in 5 with Arnold, and monitored by GhanaWeb, Peggy mentioned that her guardians were not aware of the abuse.

She has confessed to being bisexual and plans to keep her girlfriend even after marriage to her husband.

“I love my boyfriend, it is a man that will marry me but even if I do so, I will have a girlfriend because my husband will have a side chic basically.”

Touching on how she dealt with her childhood trauma she said: “I didn’t want it to be normal but I knew it would happen. I didn’t have the strength and unfortunately, I had to stay with that person. I couldn’t tell anybody about it. I think I recently told my mum and sister about it in 2019. When it happened, I told my dad but he was sick and unfortunately, he died. It hurt him because the person that did it was around us… it was not right. I was young and hadn’t even menstruated.”

Peggy who is living her life despite a marred childhood has a massive following on TikTok where she entertains her followers with her acting skills.

She has collaborated with comic actors and other TikToks in several viral videos.

The free-spirited young lady intimated that due to her ‘bad girl’ nature, a lot of people, both men and women open up to her once they find out about her sexuality.

“I will blame my love for sex on that (rape), he made me a spoilt brat. He ruined my childhood. I can’t say I am a virgin…I am bisexual. Women are nice… having sex with both genders is nice but I would say the guys are a little above them. I like everything in this world…I don’t know if my boyfriend is aware that I am bisexual…I do have sex with my girlfriend. When people get to know that you are a bad girl, they open up to you more because they think you are fun and have the vibe. For me, people open up to me. They text me, we have Snap, Instagram…people text me, both male and female.”