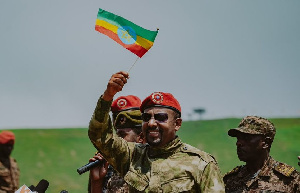 A rebel group from northern Ethiopia, the Tigray Peoples Liberation Front, TPLF, have provided updates on Prime Minister Abiy Ahmed’s much talked about decision to join soldiers at the battlefront.

PM Abiy Ahmed announced earlier this week that he was joining the army to fight the rebels who have for weeks now been threatening to hit the capital and overthrow his government.

In the absence of official information on which front the PM went to and whether or not he was still operating, a senior TPLF member, Kindeya Genrehiwot posted on Twitter that Abiy spent a brief period on an eastern front before dashing back to the capital, Addis Ababa.

“It was a brief stay at Afar & went back to Addis in rush. It was coordinated with the fake news of alleged killing of our “Generals”! God counts how many times that Denkul & our other brave Generals were killed by the institutional liars of Abiy Ahmed,” Kindeya wrote.

Abiy posted a message in Amharic on his social media handles announcing his decision on Monday evening, November 22.

The Ethiopia National Defense Forces, ENDF, have been engaged in a fight against two main rebel groups – branded terrorist groups by the government.

The two are the Tigray Peoples Liberation Front, TPLF, and the Oromo Liberation Army, OLA. The two groups have recently signed a cooperation pact in their advance towards Addis Ababa.

Abiy declared war on TPLF in the northern Tigray province a year ago, he declared the mission a ‘law enforcement operation,’ and further declared victory a month later after the TPLF fled the Tigray capital, Mekelle.

TPLF regrouped and launched a counterattack dislodging the army from Mekelle. After a siege was imposed by the government, the rebels expanded their fight into neighbouring Amhara and Afar regions with the target being Addis Ababa to break the siege.