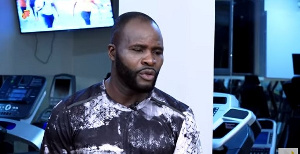 The game ended 1-0 in favor of Ghana

Former Black Stars defender Sam Johnson has described as ‘soft but correct’ the penalty call by Senegalese referee Maguette N’Diaye in the 2022 World Cup qualifier between Ghana and South Africa.

Despite holding the belief that the contact on Daniel Amartey was soft, the Hearts of Oak legend does not think referee was wrong with the call.

Sam Johnson holds that with the rules of the game now being hard on such incidents, referee N’Diaye acted rightly by awarding the penalty to Ghana.

“There are rules and regulations in football, especially at this moment and you know you will be punished for the slightest error. This is where I ask the question: did we see the player’s hand on Amartey’s back? Yes, so what is the contention?,” he asked.

“It was a clear penalty, you could see his hands on the shoulders so I think it was. However, if FIFA comes in and overturn it, then cool. If the argument was it was a soft call for the penalty, that I agree but it does not mean it was not a penalty for Ghana,” he added

In a press conference after the game, the South Africa FA among other things alleged match fixing and manipulation.

They have followed it up with a petition at the Federation of International Football Association (FIFA) seeking a replay of the game.

Their claims have been heavily contested by the GFA who maintain that the match was won fairly and cleanly.

GFA president Kurt Okraku also had to hit out at SAFA over the allegation they levelled against FA and the match officials.

“Ghana will always be a superpower over the Republic of South Africa, they can’t beat us…Even if they want we will even play the game in Barcelona and we will beat them again,” Okraku said.

He added: “You can see clearly, the South Africans keep shifting goalposts. From being robbed by the referee to the match being manipulated by external or third parties or the match being played by ball boys.

“How would they even dream that they can match up the Black Stars in Ghana? How is that possible? South Africa must not be bad losers.”