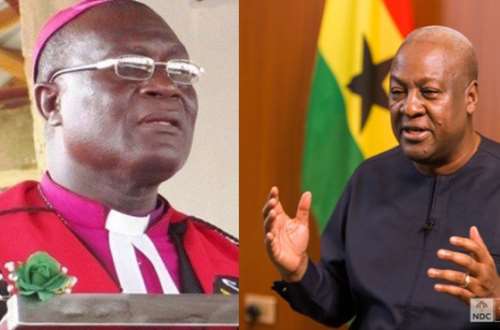 The Methodist Church of Ghana has said the comments by Rt. Rev Stephen R. Bosomtwe Ayensu on former President John Dramani Mahama are his views and not the views of the church.

Reacting to the former president’s position to repeal the controversial E-Levy Act, Rt. Rev. Ayensu said they are political talks.

He said the opposition NDC will not even win power for John Dramani Mahama to have the chance to abolish the E-Levy.

“A leading opposition party says this government has been borrowing to fund projects. But it [the government] has been strategic this time to introduce this homegrown policy to build our nation. So if someone says he will repeal this law when he wins power then such a person will not even win power to abort it.

“If the E-levy is a good policy why will you abolish it? Such people can’t even do it because history keeps guiding us. Such comments usually end up as a political talk and deceit,” Rt. Rev Stephen R. Bosomtwe shared.

Subsequently, many followers of the NDC and the former President have gone after the past Methodist Bishop of the Obuasi Diocese, describing him as anti-John Dramani Mahama.

But the Methodist Church has issued a press release to disassociate itself from the comments.

“The Methodist Church Ghana wishes to notify the General Public that the Presiding Bishop is the official Spokesperson of the Church.

“We, therefore, appeal to our noble friends of the Media not to draw the name of The Methodist Church Ghana into the alleged statements made by the past Bishop and currently the Superintendent Minister of the Amakom Circuit of the Kumasi Diocese,” parts of the press release from the Methodist Church read.

According to the Methodist Church, it continues to stay unaligned with any political party.

It stresses that while Ministers and Members of the Church may make comments on their individual basis as fellow citizens of Ghana, that cannot be taken as the official position of the Church.