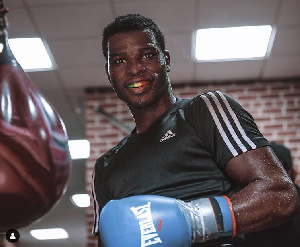 World title shot at stake in Commey vs Lomachenko fight

Ghanaian boxer, Richard Oblitey Commey will be smiling to the bank as he will pocket $700,000 purse against Ukrainian boxer, Vasiliy Lomachenko.

Lomachenko is expected to earn $750K in the upcoming fight and two boxers have been guaranteed a minimum of $250k from the bout.

The boxers will earn their income from Pay Per View [PPV], bonuses and sponsorship deals.

However, the Ghanaian boxer is likely to earn up the tune of $800k in the bout in maximum with the entire revenue expected to be in the region of $3 million.

The only Ghanaian boxers who earned over $200k are Azumah Nelson, Joseph Agbeko and Joshua Clottey.

A win for Commey will inch him closer to another world title shot after losing his International Boxing Federation [IBF] World Light Title to Teofimo Lopez in 2019.

Commey who has been in the gym with his trainers since his victory against Jackson Marinez in February believes he has devised a plan to trap the Ukrainian on Saturday.