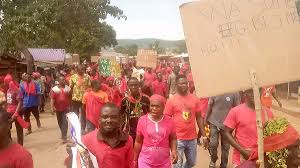 Residents of Krobo and ECG engaged in an impasse over billing

Parts of Krobo plunged in darkness

The Municipal Chief Executive for Yilo Krobo, Eric Tetteh, has rendered an unqualified apology to the Electricity Company of Ghana over death threats issued to its staff by some residents of the Krobo area.

Residents of Krobo and ECG have been engaged in an impasse over what the residents describe as wrong accumulated bills, non-reading of meters for over a year, and workers of the institution not showing professionalism.

An escalation of the situation with death threats allegedly issued to ECG workers by some residents amidst harassment has seen the company relocate its operations from Somanya to Juapong.

But speaking on Okay FM on Thursday monitored by GhanaWeb, the MCE for the area apologised for the controversy.

“I would like to render an apology to ECG on behalf of my people for the misunderstanding largely due to the activities of a group known as United Krobo Foundation, which has led the ECG to relocate to Juaben. What has happened is not representative of the entire people of Krobo,” he said.

Explaining the history behind the disagreement between ECG and the people of Krobo, the MCE said the power distribution company somewhere in 2014 updated its metres with new software, which saw people in the Krobo area receiving huge bills.

He explained that the excessive billing resulting from the software upgrade gave birth to the United Krobo Foundation, which continued agitating even after the company had taken steps to resolve the situation.

The United Krobo Foundation recently held a demonstration asking the ECG to leave the Krobo area. The management of ECG, citing the agitation and other threats, relocated its operations in the Krobo area to Juapong.

Following the relocation, however, some areas of Krobo have been plunged into total darkness due to a fault on some of the power supply lines.

Addressing the media on Monday in Tema, the Managing Director of ECG, Mr Kwame Agyemang, explained that the decision to relocate to Juapong is due to the volatile environment created as a result of continuous agitations by some residents of Krobo against ECG, including the recent threats by the United Krobo Foundation against the company to vacate from Kroboland.

He said officers of ECG will only operate on faults in Yilo and Lower Manya Krobo only under police protection.

“To protect the lives of our staff which we dare not compromise on, we henceforth will operate the district from Juapong office, and going forward, any faults intervention, or any call to correct any anomaly in the system within the Yilo Krobo and Lower Manya Krobo communities will be dependent on the availability of Police escort”.