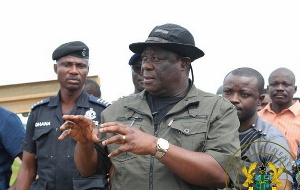 I will not be deterred by intimidation, Minister of Roads and Highways declares

The Minister of Roads and Highways, Kwesi Amoako-Atta, has served notice that his outfit is on the lookout for members of his ministry who have been awarding contracts to themselves.

This, he said, has become necessary because it has emerged that some staff of the ministry have been setting up road construction companies and then awarding government contracts on roads to those companies.

He said it remains a canker that he has had to deal with in the last five years, a situation he hopes to remedy as some of the people are retired senior staff and engineers of the ministry, reports graphic.com.gh.

Kwesi Amoako-Atta is also reported to have said that this exercise he is undertaking has gotten some staff very unhappy, a situation that is pushing many of them in attempting to bring him down by writing anonymous letters and making unfounded allegations about him. He added that none of it will deter him but rather embolden him to keep digging deeper.

It is reported that the sector minister has instructed his lawyers to send copies of the said letters containing the allegations to the investigating agencies for them to look into it while assuring that he is always open for further probe into the matter.

Previous Three times Otumfuo Osei Tutu II publicly rebuked his sub-chiefs
Next Pay me the agreed money or I spill the beans – Mzbel dares ‘Mr. President’ over ‘Papa no’