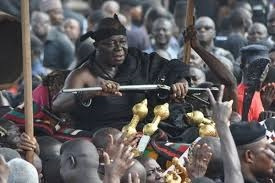 Asantehene is reputed as fearless and straightforward

The latest being a history-related rebuke at Dormaahene

The Asantehene is reputed to be a ‘fearless’, ‘no-nonsense person’ who speaks truth to power even to the political class.

It is thus no surprise when he does the same or even more when it comes to persons under his authority – sub-chiefs and other subjects.

It is said that when he sits with his sub-chiefs he is fair and firm and exacts the authority that comes with being the custodian of the Golden Stool.

Otumfuo Osei Tutu II’s most recent public rebuke was directed at the Dormaahene, Osagyefo Oseadeeyo Agyemang Badu II, and it had to do with the latter’s comments about an alleged distortion in the history of the Ashanti kingdom.

The Asantehene at the first 2022 Council Meeting in the Ashanti regional capital, Kumasi, did not mince words but stated emphatically that the Asante Kingdom has not forced any of its subjects to serve the Golden Stool but it is a rare privilege and honour for anyone to be considered a subject to the Golden Stool.

He stated that, if others are willing to submit in order to gain the needed development and progress in their respective areas, “I don’t think you have any impact, those who want to be lifted to a dignified status would be accorded that and helped.”

Otumfuo Osei Tutu II noted, “If you cannot fight for Asanteman, please vacate the seat for those who can. If you cannot sacrifice like our forefathers, then you don’t deserve the seat.

“The reason why the government created the new regions especially, Ahafo and Bono East is to expand development, it doesn’t mean if you are under the Asante Kingdom you have become autonomous, you still serve the Golden Stool (sikadwa),” he said.

“Bono East too, anybody trying to raise his or her shoulders must be careful, not under my watch. If you claim you are a man, I am also a man, but I love peace. And with Drobohene my uncle lifted you up in 1948.

“If you say today, no one can make the other a subject, who is making the other a servant here. No one has made the neighbour a servant,” he emphasized.

“I want to remind those who have probably forgotten history and speaking out of ignorance, we haven’t forced anyone to serve us, it is even an honour to serve the Golden Stool. Agyeman Badu was a teacher, he swore before me before ascending the throne as the chief of Dormaa,” Otumfuo said, adding, “It was my orchestration when Dormaa Kusi was defeated.”

The Bantamahene – one of the senior-most subjects – was captured in a video with some elders kneeling before Otumfuo as they sought to escape punishment.

Reports at the time indicated that the destoolment move came after Bantamahene had engaged in illicit land use which had been uncovered by the Otumfuo.

Otumfuo was seeking to act on investigations by some sub-chiefs in the Ashanti Kingdom that found Baffour Owusu culpable of encroaching on parts of land at the Race Course Market.

The head of the Konti Division of the kingdom had also been accused of forcefully diverting the course of the Subin River for personal benefit.

He was subsequently pardoned and remains at post till date.

In November 2016, Otumfuo Osei Tutu II, publicly cautioned chiefs under his jurisdiction over the practice of under accounting for the sale of lands.

He also slammed the exorbitant sale of lands which situation he noted hindered plans at job creation hence deepening the issue of unemployment.

Otumfuo disclosed to an audience that paid a courtesy visit on him at the Manyhia Palace that he was getting as low as GH¢150 or GH¢200 from chiefs as his share for the sale of lands whereas such chiefs pocket huge sums.

He noted that all land proceeds were recorded at the Asantehene’s Land Secretariat before threatening to expose subjects who had decided to scanty sums out of the big amounts that they take for selling lands.