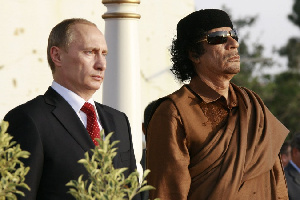 Russia-Ukraine crisis: Why 2011 video of Putin ‘defending’ Gaddafi has resurfaced

Vladimir Putin has been thrust into the global limelight, if you want; he has thrust himself there with his decision to enter Ukraine – he says it is a military operation not an invasion.

The Russian government is defending the decision to ‘enter’ Ukraine through all available means and has so far vetoed a pro-Ukraine vote on the UN Security Council.

The war is playing out on ground, in diplomatic circles, in the media – traditional and social, and in the hearts and minds of many across the world.

On social media, Twitter has had cause to point out the probability and or incidence of fake news peddling in what could be, at best, propaganda postings on pro or anti-war positions.

GhanaWeb’s social media monitoring has picked up a widely circulated video of Putin talking about Gaddafi, 10 years ago in Denmark. Below is what we know so far about that video and why it is trending.

1. The video was of Putin in Denmark at a time NATO had entered Libya to fight with allied forces against Gaddafi in 2021

2. Putin was then a Prime Minister to President Dmitry Medvedev

3. The original news clip was posted on YouTube by pro-government news outlet, RT News and was titled, ‘Putin: Who gave NATO right to kill Gaddafi?’

4 – At the time of filing this report had been viewed 5 million times but snippets had been cut and were circulating especially on Twitter.

5. Most of those posting it on social media are point to NATO’s double standards in ordering military aggression against Libya (Gaddafi) but lambasting Putin (Russia) over Ukraine

A translation of Prime Minister Putin’s submission per the report was as follows: “The coalition are destroying Gaddafi who is not their goal, then why bomb his palaces? Now some officials claim they are eliminating him was in fact their goal.

Who gave them that right, did he have a fair trial? Returning to the no-fly zone, the bombing are destroying the country’s entire infrastructure.

“When the so-called civilized world uses all its military power against the small country destroying what has been made by generations, I don’t know if that is good.”