Home / GENERAL NEWS / SAD VIDEO: ‘She hit me hard on the head with a stick’ – Woman narrates how she was nearly killed by her debtor 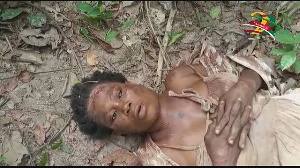 SAD VIDEO: ‘She hit me hard on the head with a stick’ – Woman narrates how she was nearly killed by her debtor

A 45-year-old woman identified as Patricia Oduro has narrated how she nearly escaped from death over an amount of GHC7000.

Narrating her ordeal to the Police, Patricia Oduro said she had given GHC3000 to Ama Bono, her neighbour, to be invested in a galamsey business that yielded additional four thousand cedis after some few months.

She explained that she needed the money to pay her two-year rent and use part for a ‘chop bar’ business she wanted to venture into.

Ama Bono then asked her to accompany her to a galamsey site to collect the money for her.

Somewhere in the middle of the bush road on their way to the galamsey site, Ama smashed Patricia’s forehead and neck with a stick she was holding after which she inflicted her with machete wounds on parts of her body leaving her unconscious.

According to Patricia after she regained consciousness on Tuesday dawn, she screamed for help where some galamsey operators around the same area came to her rescue.

She then mentioned to her rescuers that Ama Bono had done that to her. The rescuers went to the community to inform Patricia’s uncle who is a retired police officer who also reported the case to the Wassa Akropong Police Command.

The police, together with community folks went to the scene where Patricia was lying very weak. She was rushed to the Wassa Akropong Government Hospital for treatment, after which Ama Bono was arrested by the police.

The police are investigating the case and subsequently, arraign Ama Bono in court to face the full rigours of the law.

Meanwhile, Patricia Oduro has been discharged from the Wassa Akropong Government Hospital.