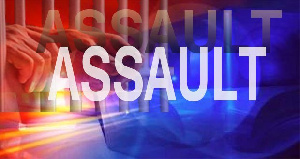 Though the bible specifically prescribes using the rod as a correctional measure to ensure responsible child-raising, many parents, guardians and teachers resort to extreme means to ensure this responsibility.

A fifteen-year-old basic six girl in Ofoase Ayirebi in the Eastern Region is the latest to suffer this barbaric and extreme parental discipline orchestrated by her step-father.

The step-dad whose name was only given as Kofi in response to his daughter’s alleged waywardness hired and led a group of neighbourhood boys to abuse and sexually molest the victim.

The victim was said to have left the house on Friday, 27th May, 2022 and failed to return home until Saturday morning, provoking the step-father to organize some boys within the neighbourhood to beat her up, only for them to end up torturing and sexually assaulting her in the process.

Captured on video intercepted by GhanaWeb, the visual begins with the victim brushing her teeth in the morning when the three boys holding canes accosted her and poured water over her. Next, they viciously splashed volumes of water on her, chanting, “Today, we’ll wash a vehicle” in the process.

With the victim now wailing uncontrollably, one of her assailants whom the victim consistently referred to as Paapa then began removing her upper wear, leaving her with only her braziers on.

Another boy then joins him as they hold her by the hands and legs and forcibly removed her ‘skin-tight’ trousers, leaving her stark naked in the process.

They then marched her into a nearby bush, beating and caning her naked body in the process. At a point, Paapa gropes her violently from behind before inserting his fingers into her private part.

A man, identified as her step-dad, now emerges in the video also with a cane with which he also mercilessly whips the victim.

The other boys, now join in the beating as they lead her back to the house.
The victim in an audio recording available to this portal is heard narrating her ordeal to her uncle. She admitted leaving the house and spending the night outside but claimed that she spent the night and slept at her friends’ place.

According to her, she met the three boys in the morning who told her, her step-father had sent them to come beat her. She furthered that during the assault, one of the boys told her that she would have been spared this ordeal if she allowed them to sleep with her.

She said, “my step-father got two canes to beat me, one broke and he took the other. I ran away and one of the boys pursued and told me all this wouldn’t have happened if I allowed them to have sex with me and the other inserted his finger into my private part.”

The victim alleged that her ordeal did not end there as upon reaching the house, the father instructed the boys to insert pepper into her private part. She complained, “My father asked one of them to bring pepper which they inserted into my private part and poured water on me.”

This portal is reliably informed that though a formal complaint has been made by the uncle of the victim, attempts are being made to involve family elders and traditional authorities of the community to arbitrate the issue.

Ofoase Ayirebi District Police Commander, Superintendent George Bawa when contacted by GhanaWeb confirmed that a formal report had been received in relation with the case.

He disclosed that one person in police custody on a defilement case has been identified as a suspect in this case as well.

According to him, one Emmanuel Adarkwah (the victim’s uncle) on Friday, 3rd June, 2022 lodged a complaint of assault against the perpetrators which includes one Simon, against his niece.

A police medical form was subsequently issued to the complainant to send the victim to the hospital for medical assessment but the Commander added that the victim and complainant have since failed to show up with the results.

Previous The most talked about man in Ghana now
Next WATCH: Afia Schwarzenegger curses Maurice Ampaw