Home / GENERAL NEWS / The most talked about man in Ghana now 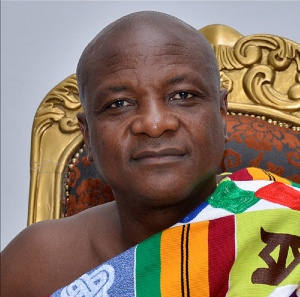 The most talked about man in Ghana now

One recent gesture of his has put him up as a respectable, considerate and admirable leader.

He is the Agbogbomefia of the Asogli State, a former President of the Council of State, Board Chair of Accra Hearts of Oak and is considered one of the most respected traditional leaders in Ghana.

Togbe Afede XIV is his name.

His rejection of a huge sum of money as Ex-gratia for his service in the Council of State is what has earned him huge admiration from Ghanaians all over.

In a statement dated June 6, 2022, the former Council of State President offered an explanation as to why he was rejecting a colossal sum of GHC365,392.67 as Exgratia for his service in the same capacity for four years – 2017 to 2020.

His reasons were clear –

– He thought the extra payment was inappropriate for a short, effectively part-time work for which he received a monthly salary and was entitled to other privileges.

– He did not think his work merited the payment to him of the stated amount in addition to the salary he enjoyed from what was effectively a part-time job.

– He has a general abhorrence of the payment of huge Ex Gratia and other outrageous benefits to people who have by their own volition offered to serve our poor country.

Many have jumped on to some of these platforms to commend Togbe Afede XIV for his act of bravado.

“Men with integrity and love for God and country are taking their rightful place,” one tweet said.

“Togbe Afede, leader who Walks the talk,” another said.

“Togbe Afede XIV! One of a kind,” one other said.

“We are left with 3 of his kind in this k3ntry. Whatttt!” a Facebook user added and the list goes on and on.

Togbe Afede must be celebrated generations after generations and must be taught in schools for students to admire and emulate his lifestyle.

Let’s take a look at who this man who has got citizens talking is.

Togbe Afede XIV is the Agbogbomefia or Paramount Chief of the Asogli State in the Volta Region of Ghana. He was born at Ho in the Volta Region, Ghana, on 23rd April 1957 to the late Cpl. Patrick Akpo and Madam Rose Anyawoe, both from Ho Bankoe and given the name James Akpo.

Being the grandson of Herman Ladzi Akpo, who was a renowned Catechist and educationist, James Akpo, as the Agbogbomefia was called, together with his late twin brother, was enrolled in primary class one at the Ho Bankoe Roman Catholic Boys School in 1961 at the age of four.

Togbe Afede XIV is an alumnus of University of Ghana where he studied and earned his first degree, Bachelor of Business Administration in Accounting in 1979 and later, an MBA from Yale University.

Togbe did his post-graduation national service at the erstwhile Bank for Housing and Construction (1979-1980), where, as a planning officer, he performed financial analysis of loan applications’ projects, and established and negotiated short and long-term loans and financial packages for clients.

Between 1981 and 1984, Togbe worked with the Ghana Cocoa Marketing Board as an Accountant. Togbe subsequently lectured in Economics and Accounting at Sokoto State Polytechnic’s School of Management Studies in Nigeria (1985-1987).

After committing his scanty resources to the pursuit of his Wharton and Stanford aspirations, Togbe was unable to file any applications in 1986. However, he was awarded a substantial fellowship by Yale University.

So Togbe finally received his MBA from the Yale School of Management in May 1989.

In 1989 he returned to Ghana, accepting an appointment as a lecturer at the School of Administration, University of Ghana. He taught Financial Accounting (BSc) and Accounting Theory (MBA) until 1994. During that time he co-founded Databank Financial Services, Ltd.

Togbe Afede XIV is the founder of the SAS Group of companies and provides overall strategic direction to the businesses.

He has over 18 years of experience in investment banking, having co-founded Databank Financial Services Ltd in 1990. Togbe has played a critical role in the development of Ghana’s capital markets, including developing and publishing the first ever stock market indices in 1991.

Source: www.ghanaweb.com
about GHANA IN man most NOW talked THE 2022-06-07
Elvis Anokye
Share

Tags about GHANA IN man most NOW talked THE

Previous Sir John’s Will: ‘This is peanut, mine will be a shocker’ – Kennedy Agyapong
Next SAD VIDEO: Step-father leads ‘area boys’ to molest, sexually assault daughter for going wayward