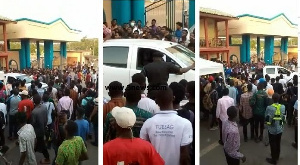 A suspected thief who has gained notoriety for stealing mobile hand devices and other valuables from students of the Takoradi Technical University (TTU), was nearly lynched by angry students after he had attempted to sell back a stolen phone to a student on Tuesday.

The suspected thief, whose name was given as Emmanuel Gyedu, is said to be the son of a popular pastor in Tarkwa.

According to some students who have fallen victim to the theft, the suspect will initiate chats with contacts on stolen phones after grabbing them and making demands.

Through clairvoyance, he will spot a family member on the contact list and initiate a chat, demanding money before the stolen handset will be released.

“I paid over GH¢500 to him but he did not return my phone. He was able to make out the contact of my mother and took monies from her,” a victim narrated.

Two days ago, the suspect, on his usual hunt, contacted one of his victims. They reached an agreement that they meet for an exchange.

The victim then proceeded to inform some friends about Emmanuel and the meet-up. They then laid ambush for him.

True to his words, the suspect came in a taxi to meet his victim at Acalima, where most of the students have their hostels.

Unfortunately, for him just as he was engaging his victim, the friends who were laying ambush pounced on him.

Emmanuel then took to his heels and went into one of the nearby hostels and locked himself in one of the bathrooms to escape the wrath of the angry students.

He was later rescued by the school’s security and another policeman after which he was sent to the police station.