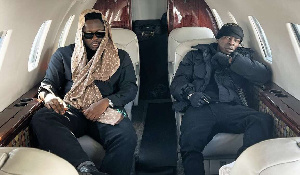 Shatta Wale and I are not a duo – Medikal clarifies

Ghanaian hiphop musician, Samuel Adu Frimpong, popularly known as Medikal, has responded to claims that he and Shatta are now a music group.

Since Shatta Wale and Medikal came out of prison, they have become the best of friends, doing music and even going on tours together. This has bred a lot of conversation on social media which suspects the two are now a music duo.

In an interview with Rev. Erskine on the Myd-Morning Radio Show on Y107.9FM, Medikal denied these claims, saying Shatta Wale is like his brother.

“We have a joint project together and Shatta is like my brother, my blood. We wanted to do something different and with the Ghanaian industry it has mostly been the individuals who drop albums, so we wanted to join forces and do something together, combine powers and bring something beautiful. We felt like we needed to do a tour for the project, so we can spread the message”.

He further debunked rumors that they were not booked for some of the shows.

According to Medikal, they were both booked for all the shows they performed at, hence, there was no case of one party dragging the other to perform with him.

“It was great. It’s always nice when I meet my fans and people who support my music. So, it was a vibe and it was beautiful. It was nice to be on tour with Shatta. We were having fun together”.

Tags A AND ARE duo I not Shatta WALE