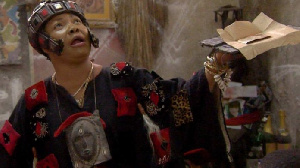 The demonstration organized by a group identifying itself as Ghana Needs Ghana, largely saw the participation of several individuals who claim to be victims who were duped by the former fetish priestess.

According to the victims, they were deprived of their monies and valuables when they visited the fetish priestess at her shrine in Sowutuom for her infamous ‘Sika Gari’.

Agradaa until her conversion from a priestess to an evangelist was popular for advertising to possess money-doubling powers.

Amidst several allegations of using the ‘Sika Gari’ to dupe people under the guise of money doubling, Agradaa in April 2021, announced her she has turned a new leaf.

But protesters say they are demanding the arrest and prosecution of the former priestess for duping them.

Some of the protesters who shared their encounter with Agradaa said she used intimidation and deceit to take their money and valuables with the promise of doubling it.

They stated that they have failed in several attempts to retrieve their monies from Agradaa.

The protest which commenced at the Obra Spot ended at the Greater Accra Regional Police Command where a petition was presented to the police against Agradaa.