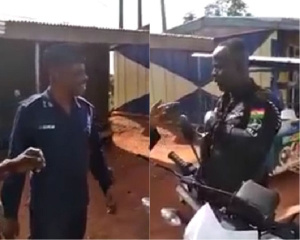 VIDEO: Why police officers faced off in public

The public face-off between a junior Police officer and his superior in the Ashanti region has trigged an internal disciplinary process by the Ghana Police Service in order to address the misunderstanding which resulted in heated verbal exchanges.

The incident, the Police said in a statement, occurred on Wednesday, July 20, 2022, on the Atwima-Foase road.

The misunderstanding, captured in a viral video available to GhanaWeb, was between Corporal Boakye, an officer with the Formed Police Unit, FPU, and Supt. Albert Quansah, the Atwima-Foase District Commander.

But what really happened?

Sources say, on the said Wednesday morning, the District Commander was driving between the Yabi and Dida stretch of the Atwima Foase road when he saw Corporal Boakye and some members of the FPU conducting traffic checks.

He stopped and advised his colleagues to move from the end of the road where they were conducting the checks to avoid accidents, but these officers ignored him.

The Commander drove off to the District Headquarters and returned minutes later in the official police vehicle together with the Station Officer and two other officers.

The District Commander, Supt. Quansah, then asked Corporal Boakye to get into the police vehicle but he [Corporal Boakye] declined.

After some verbal exchanges captured in the viral video, the District Commander asked the officer for his identity and other credentials, then he retorted he is Corporal Boakye and he ‘ordered’ the commander to “meet him” at the FPU.

Below is the exchanges between the two officers:

District Commander: I say, get onboard!!

District Commander: Give me your number.

Corporal Boakye: My number don’t you..ah, this is my name? I’m from FPU.

Corporal Boakye: Meet me at FPU.

District Commander: I should meet you at FPU?

Corporal Boakye: Meet me there. You are not the one who brought me here.

In a JoyNews reportage sighted by GhanaWeb, the FPU personnel later sent out a service message to the commander of the FPU, Supt. Kingsley K. Kawudie, saying:

“The senior officer got to their checkpoints and ordered all the cars to move and go because they are not police officers, they’re armed robbers. After that, the officer went and brought his men that they should disarm the corporal who was engaged with him, and his men failed to do so, so he himself attacked the junior officer and tore his uniforms.”

“The Police have taken note of a viral video in which some Police Officers are seen exchanging words, and we wish to state that this incident occurred on the morning of 20th July 2022 and investigations commenced into it that very day.

“We would like to ensure the public that the due internal disciplinary process of the service is being applied in dealing with the matter.”

Tags faced IN OFF officers police Public WHY