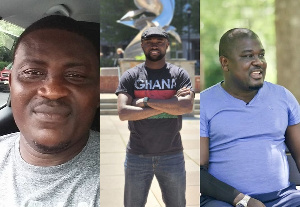 Six Asante Kotoko legends who moved to the US after retirement

The Ghana Premier League has produced some outstanding footballers who have retired and moved to the United States of America.

These great names have begun a new career path in the United States as they look to make a living after hanging up their boots.

GhanaWeb compiled a list of Ghanaian players who retired and moved to the United States.

Nana Arhin Duah is former striker of Asante Kotoko and Ashanti Gold. He was a member of the Ashanti Gold squad that finished second in the 1997 CAF Champions League.

Nana Arhin Duah played for the Black Stars. He was capped 10 times and scored 3 goals.

He hanged up his boots in 2009. Arhin Duah is currently based in the USA with his family.

Samad Oppong had two spells Asante Kotoko. He had his first stint from 2009 to 2011 before making his return in 2014 and departing again after just a season.

The 33-year-old has returned has is currently based in the USA. He recently featured in a friendly game between Ghanaian Community in Ohian and Serrie Leonean community.

Emmanuel Osei Kuffuor played for both Hearts of Oak and Asante Kotoko. He spent his best years at Hearts where he won most of his titles.

Osei Kuffuor relocated to settle in the USA right after his retirement in 2010.

Stephen Oduro is an Asante Kotoko legend who served the Reds for 17 years. He joined Kotoko from Real Tamale United.

Following his retirement in 2017, he relocated to base in the USA, Columbus, Ohio.

Anthony Osei Kwadwo Mensah is a former goalkeeper for Ashanti Gold, Asante Kotoko and Black Stars in the 1990s.

He was a key member of the silver-winning Ashanti Gold squad in the 1997 CAF Champions League.

Osei Kwadwo is currently based in Ohio, USA.

Mark Addo Amofah joined Asante Kotoko from Real Sportive in 2006. The striker scored 21 goals in 29 matches for the Porcupine Warriors during his one-year stay with the club.

Regarding international football, he played for the Black Satellites of Ghana.

After leaving Kotoko in 2007, he joined the South African side, Bloemfontein Celtic before securing a move to Europe to play for Sinderskye and Beitar Ramla in Denmark and Israel.

Mark announced his retirement in 2014 and then moved to settle in the United States. In 2021, he made the cut to join the US army after passing out successfully.