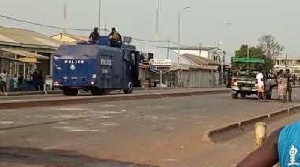 Six Police officers have been interdicted by the Service for their roles in a shooting incident that rocked Lamashegu, a suburb of the Northern Regional capital, Tamale.

The events of Sunday, February 13, 2022, led to the discharge of live ammunition on a young man who was reportedly fleeing from a Police patrol team in an unregistered vehicle.

The Police administration issued a statement early Monday, February 14, 2022, giving details about the extent of investigation into the incident and steps being taken to achieve a durable peace in the area.

The affected officers after an initial investigation are as follows:

“The Police administration has also dispatched the a team of investigators led by Deputy Director-General of the Criminal Investigation Department DSP Fredrick Agyei to lead investigation into the matter.

“Personnel from the Police Professional Standards Bureau (PPSB) have also been detailed alongside the CID to look at professional standard related issues of the incident,” the statement added.

Other measures include that the Regional Commander should liaise with affected families and offer necessary support.

Police appealed to the people of Lamashegu and wider Tamale Metropolis to remain calm as investigations continue.

“We would like to assure the public that anybody found culpable will be dealt with according to the law,” the statement signed by DCOP Kwesi Ofori, Director-General, Public Affairs, concluded.