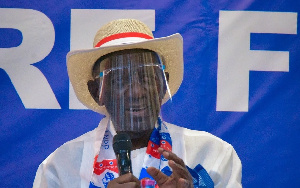 An old video of ex-President John Agyekum Kufuor talking about press freedom within the general context of freedom of expression has popped up online.

The undated video in which he is captured touting the ruling New Patriotic Party’s credentials in championing press freedom is likely a party event.

It was republished on social media by Accra-based Joy FM at a time concerns are being raised about the arrest of journalists and a number of known government critics for offences ranging from making false statements and peddling falsehoods.

The former president is heard saying: “Have you realized that when we came (into power) the first law we repealed was the Criminal Libel Law. Today you hear on FM stations, people freely expressing their views.

“Meanwhile, there are a lot of NDC people owning radio stations even that us. They keep piping propaganda, all they peddle is lies.

“We knew that as a person without the freedom to express your views, then in some way, you have been suppressed. So we said remove the Criminal Libel Law, let the people feel free, let them think free and let them talk freely.

“That is what happened. We want Ghanaians to feel that truly, you are a free nation. A free man is the best factor for production,” he stressed.

A number of government critics had a hard time last week, from those in the media to activists – who serially lash out at the Nana Addo Dankwa Akufo-Addo-led government.

One sentenced to jail, two others arrested and charged to court, and the fourth; picked up and being held pending arraignment on Monday, February 14, 2022.

The wave of arrests and prosecution has triggered concerns about the way and manner in which government is going after critics with criminal processes in instances that some politicians, civil society groups and social commentators aver that civil processes should suffice.

1 – Godsbrain Blessed Smart, the host of Onua TV’s Maakye program, was in December 2021 arrested for calling for a revolution in the country while decrying the rate of corruption and decadence in governance.

2 – A Radio XYZ presenter, Oheneba Boamah Bennie was last week jailed two weeks for contempt for statements he allegedly made against Supreme Court judges after the 2020 elections.

3 – Mensah Thompson, Executive Director of ASEPA, a think tank, charged with publication of false news by a Circuit Court in Accra and was subsequently admitted to bail of GHC50,000 with two sureties.

5 – Police confirm arrest of Oliver Barker-Vormawor, an activist and convener with the #FixTheCountry Movement, for threatening a coup in a Facebook post.

In an open letter to President Akufo-Addo, former President John Dramani Mahama lamented what he said was the criminalization of speech under the current government.

The latter part of his piece which cited some of the above case read: “This is a dangerous blueprint you are fashioning for our dear nation and it must not be encouraged. Your actions as President have totally discredited your self-acquired accolade as a human rights lawyer and activist.

“Ghana has long emerged from the unfortunate past where journalists were cowed by incarceration and brutalization.

“I fear that if you do not take immediate action to arrest this unfortunate trend, when you exit the high office of President in January 2025, freedom of speech and a free media will certainly not be counted as part of the legacy you leave behind.”