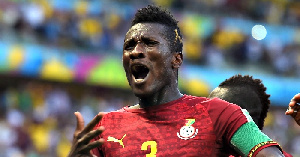 Some South Africans on social media, specifically Twitter, have heaped praises on former Black Stars captain, Asamoah Gyan, for what they describe as ‘honest’ opinion on the most talked-about penalty incident in Ghana’s win over South Africa.

The Black Stars beat Bafana Bafana 1-0 in the FIFA World Cup qualifies earlier this month to qualify for the playoffs.

Gyan has indicated that the penalty was a soft one.

“I think the incident was a bit casual. From where I sit and how I saw it, I think Daniel Amartey went down too easily but the referee was closer to the spot and probably had a better view of the situation. Remember was the tempo of the game also could have influenced the referee’s decision to award the spot-kick,” Gyan said in an interview with Asempa FM.

South Africans on the bird app have lauded Gyan for his comment with some labelling the African great as an ‘honest man’.

Meanwhile, the South African FA has petitioned FIFA, hoping to be offered a replay of the fixture. The Ghana FA as required has sent a response to FIFA and thus the two associations await a verdict.

Below are some tweets in relation to Asamoah Gyan‘s comment