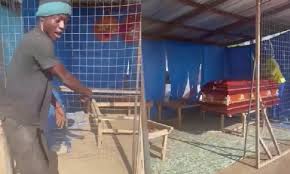 Thieves step up their game in Ashanti region

Of all the items that could catch a thief’s attention, one would have never thought a coffin would have been part.

It is interesting to note that two coffins have been reported missing at a carpentry shop in Mamponten, a suburb of Kumasi and the whole township has been plunged into a state of shock.

In a video making rounds on social media, it appeared the thieves broke into a carpentry shop by making way through a metal cage used to fence the entrance.

Unclear what the thieves intend to do with the coffin, the tables on which they were placed were captured empty.

The workers at the shop couldn’t hide their laughter as the whole incident appeared funny to them.

One of them in outmost amazement said;

“They have stolen two coffins here. Coffins. Who stole these coffins and what will the person use them for. The thief is really serious and determined. We haven’t experienced this sort of thing before.”

Watch the video published by Magraheb TV below: