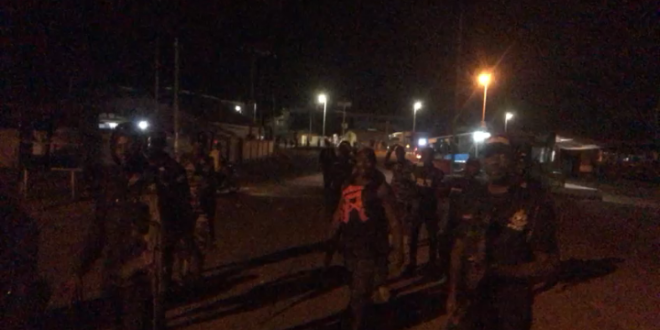 News emerged late Wednesday evening that hundreds of young people had thronged a local Police station demanding the release of three persons arrested in connection with the flogging of two persons captured on a leaked sex tape.

A Citi News reporter reported that the police contingent comprised about 200 men who were firing teargas and firing shots while the youth also threw stones at them.

Citi News reporter spoke to one Seidu who explained that they were demanding the release specifically on one Bushiran who is among the three persons arrested by Police on June 1, 2022.

“This afternoon, our brother Bushiran was invited by the regional police command in connection with some action that was done yesterday at the Wa Naa’s palace.

“And this one, it was an agreement between the youth and the Wa Naa that anytime such an act is out, we should bring them to the Wa Naa’s palace for punishment. Yesterday, the people were punished and today our brother was invited to the police station.

“We are here for his release, we don’t know why he must be in cells …he did not snap the video, he was not the one having the sex, he didn’t release the video, he didn’t beat anybody, we are asking the regional police command to release Bushran otherwise we are not going to sleep today,” he stressed.

The Police announced on June 1 that they had arrested three men in the viral video in which two persons tied to a pole were being flogged at the Wa Naa’s palace.

According to the police, the suspects were arrested with the support of the Wa Naa and some community members and will face the full rigour of the law.

“The Police have arrested three (3) persons in connection with a viral video in which some people were seen publicly flogging two people on the forecourt of the Wa Naa’s Palace. The suspects, Sidiki Osman, Bushiran Knigir and Issahaku Mahama, were arrested with the support of the Wa Naa and some community members. The three will be taken through the due process of the law,” the statement read.

It added that “the Police are pursuing the remaining suspects to arrest them to face justice.”

A viral video of the flogging incident showed the victim tied to a pole as two men flogged her in front of the palace of the Wa Naa in the Upper East Region.

The footage received condemnation from some people citing a clear abuse of power, while others called on the police to take action and bring the perpetrators to book.