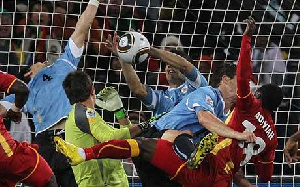 Suarez basically produced a save on the line worthy of a goalkeeper and was shown a straight red card as a result.

Speaking in an interview with Joy FM, Ayew who was part of Ghana’s 2010 World Cup squad said he would have acted the same way if the incident happened at the other end.

“Like I said before and I said in the past that maybe if it was me or someone else, I could have done the same on the action,” the Al Sadd forward said when asked about Suarez’s action.

“It’s true he killed us, he killed our dream, he killed Africans’ dream, and we all have that feeling that he didn’t make us the first [African] country to get to the semifinals, so that will always be there.”

“But he did it for his nation, he took a decision but we don’t look at that, we want to play well and try and succeed,” he concluded.

The Black Stars were awarded a penalty after the Luis Suarez incident but Asamoah Gyan failed to convert the penalty leading to Ghana’s elimination of penalty shootouts after the extraction.

Meanwhile, Asamoah Gyan has revealed that he nearly punched Luis Suarez for denying the Black Stars an opportunity to play in the semi-finals of the Mundial.