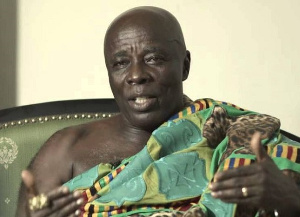 There is tribal tension simmering between the Chief of Akyem Engresi and krobo settlers at Akyem Kwateso over land dispute .

The tension has escalated in the last few weeks after the Chief of Engresi Osabarima Sarfo Kyei Kantanka banned the krobos in Kwateso from burying their dead relatives in the community since the land does not belong to them.

The Chief of Engresi has further ordered each Krobo residents in Kwateso to produce land tittle document or risk being chased out from the community .

This was announced at information center to the Krobo settlers .

“We heard announcement by Engresi chief that he has issued a month ultimatum to us to leave Kwateso. Again, anyone who is buried at Kwateso will be exhumed and dumped in our houses so we can go and burry it in Somanya.

Abusuapanyin Kwasi Dankwah who spoke on behalf of the Kweteso chief and residents told Starr News their forefathers purchased the land from Muoso chiefs over hundred years ago and settled on it.

“Our forefathers purchased Kwateso lands from Muoso. We have since lived peacefully with them but for Engresi chief he wants to invade the community and sack us. So we are appealing to our MP Hon Abena Osei Asare, our DCE, Police commander, Regional Minister and all intervene in this matter. We are also appealing to IGP to Intervene. We need peace not war”

However, the Chief of Engresi is disputing the claims.

The Chief, Osabarima Sarfo Kyei Kantanka, said the Krobo residents have failed to honour summons by the Okyenhene Osagyefuo Amoatia Ofori Panin overlord of Akyem Abuakwa stool lands on the matter instead they wrote a letter through their lawyer.

“The order is that they should properly register the lands they occupying failure to do so they should leave the community. You can’t live on Okyeman land and disrespect Osagyefuo Amoatia Ofori Panin Kwaebibiremhene. He summoned them but they rather wrote a letter through a useless lawyer to Osagyefuo that he can go to court. This fight is not Osagyefuo’s fight it is me Chief of Engresi in charge of this area who is fighting for him”.

The Chief of Engresi emphasized on ban placed on the people from burying the dead in the community.

“So my order is that their forefathers came to settle here to farm not to bury the dead. Henceforth nobody should bury any dead body on the land. I will direct my men to exhume any dead body buried after this order and dump same in their houses. Anyone who has built at Kwateso should come and properly register the land if you have not done same. I will use all legal and traditional means to take back my land “.

According to the chief “I am not saying I am sacking them. They should produce land documents if it has expired they have the opportunity to renew it. If they fail to honour this order, and they continue to disrespect Okyenhene, we will show them the might of Okyeman”.

Starr News has however gathered that the land dispute has erupted due to discovery of large quantities of gold in the Kwateso community.