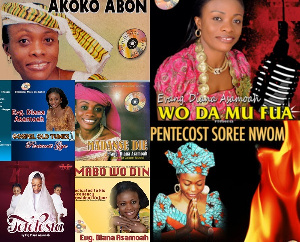 The 9 monster albums Diana Asamoah has lost to Frimprince

The arts and entertainment industry was hit with a shock, on September 14, 2022, following news of the termination of the contract between music executive Anane Frimpong popularly known as Frimprince, and Evangelist Diana Asamoah.

The executive producer, upon the termination, is to take over nine popular albums by the celebrated gospel singer and worshiper.

“Frimprince shall continue to have absolute rights over all songs that were produced under the production,” the signed document dated August 4, 2022, read as the records were listed.

Having taken control over Diana Asamoah’s Facebook page, management shared the development on the social media platform signed by both parties.

Effectively, Diana Asamoah will no longer have the right to the aforementioned catalogue produced during her time with Frimprince – a relationship which started in 2000.

Throughout their working relationship, the musician has spoken highly of her executive producer. Based on this, many have expressed utmost surprise over the development.

Meanwhile, it is unclear what triggered the termination of the contract.

Tags 9 albums ASAMOAH DIANA Frimprince has LOST monster THE to