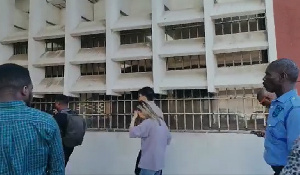 Watch how Aisha Huang arrived in court for trial

Information reaching GhanaWeb indicates that galamsey kingpin, Aisha Huang has arrived at the Accra Circuit Court for her trial.

She arrived in a purple t-shirt with a pair of jeans and her hands covering her face.

She was escorted by another Chinese man.

Ms. Huang is facing two charges of mining without licence and engaging in the sale and purchase of minerals without a valid licence.

This follows her rearrest in the Ashanti Region.

She was subsequently arraigned and appeared in court on September 5, 2022.

She is expected to stand trial with three other accomplices – Johng Li Hua, Huang Jei and Huaid Hun.

Her case was however discontinued and she was deported. Her deportation meant the state discontinued the trial against her.

She however found her way back into the country leading to her recent arrest. An Accra Circuit court last week remanded Aisha Huang and three other Chinese nationals into custody to reappear on charges of illegal gold mining and trading.

Her recent arrest is on the same issues of illegal mining.

Tags Aisha ARRIVED court FOR How Huang IN TRIAL WATCH

Previous FBI hunting for Nigerian, 29, who scammed New York State US$30 million
Next The 9 monster albums Diana Asamoah has lost to Frimprince