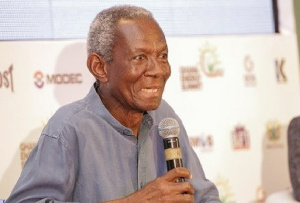 Paul Adom-Otchere, the host of Metro TV’s Good Evening Ghana, has recounted the story of how founding a member of the New Patriotic Party, Kwame Pianim, tried unsuccessfully to stage a coup d’état against then head of state, Flight Lieutenant Jerry John Rawlings, in 1982.

Adom-Otchere narrates that the celebrated economist had set his plans in motion and was plotting the upheaval of the Rawlings regime which had toppled the Limann government a year earlier.

Unfortunately for Pianim, his girlfriend who according to Adom-Otchere, had close a relationship with some leading members of the Provisional National Defence Council (PNDC) regime snitched on him.

Kwame Pianim and his cohorts were arrested and subsequently convicted on charges of treason. He was jailed for ten years, Adom-Otchere claims.

“Kwame Pianim attempted a coup d’état to overthrow the PNDC government of Flt Lt Rawlings. The rumour is that Kwame Pianim was dating a very young lady. I know the lady but won’t mention her name. She is a very famous person in Ghana and my birthday mate.

“She was close to the PNDC regime. It is reported that Kwame Pianim’s movement was seen by the lady. He might have discussed it with the lady and the lady told the PNDC about it. The lady is suspected to have told the likes Kojo Tsikata, Adjei Boadi and others who were in charge of the PNDC security apparatus.

“A report was made to Flt Lt Rawlings and he was jailed for ten years. He was jailed because apparently there were not sufficient evidence to convict him,” he said on his show.

Kwame Pianim regrets not his actions

In 2010, Kwame Pianim opened up on his coup plans and he defended his actions, stressing that he acted within the law.

“It is also stated that if any Ghanaian in the course of defending the Constitution against usurpers suffered in any way, they were to be compensated upon the reinstatement of the Constitution.

“…We all owe allegiance only to governments established by the sovereign people of Ghana and duly elected by the sovereign people of Ghana and anybody else who takes over this country through the barrel of the gun cannot claim protection from the Constitution,” he said, stressing that, it was a bit sad that the judiciary did not take the opportunity offered by his case to confirm what the 1992 and 1979 Constitutions encouraged Ghanaians to do under such circumstances.

Mr. Pianim disclosed this during an interview with Steve Mallory, editor of the Africawatch Magazine in 2010.

Previous Salaries will be paid in the short term – Government assures public servants
Next Ukraine crisis: Ghanaian students cry over shortage of bread and water