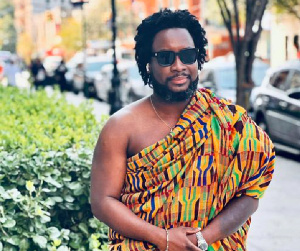 Ghanaian gospel artiste based in the United Kingdom, Sonnie Badu on Friday, September 9, shared a photo of himself wearing a colourful kente cloth to represent the rich culture and tradition of his region.

In the Facebook post that has generated over 740 comments, his fans showered him with compliments for selling Ghana to the world.

Ghanaian journalist Manasseh Azure Awuni reacting to the post, corrected the singer on the wrong spelling of ‘Asante’ which was misspelt as ‘Ashanti’.

According to him, many locals get confused with the right spelling by replacing the last letter of Asante with the alphabet ‘i’. He added that it was adulterated by the white man.

He, however, complimented Sonnie for his choice of outfit for the wedding he recently attended.

He further explained that: “The “Ashanti” in our books is the white man’s adulteration of Asante, which is still being used to identify the administrative region of the Asante people. I wonder why we cannot just change it to Asante Region, instead of keeping the “Ashanti” Region. It’s just like Kibi (Kyebi) and Akim (Akyem) which are still on some names of schools and towns. And many will be surprised to know that there is no ethnic group called Dagaati. Maybe, we have to make a conscious effort to return to the right names.”

Previous Nogokpo is a place of justice, not death and curses – Fiifi Kwetey
Next What transpired when Otumfuo met Queen Elizabeth in 2000 at Buckingham Palace