Home / GENERAL NEWS / Nogokpo is a place of justice, not death and curses – Fiifi Kwetey 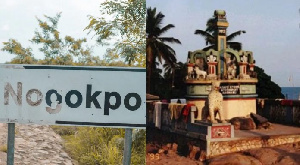 Nogokpo is a place of justice, not death and curses – Fiifi Kwetey

Nogokpo, ordinarily is just another village located in the Volta Region of Ghana, specifically in the Ketu South Municipal Assembly.

It has, however, become known more for a spiritual significance relative to the presence of a no-nonsense deity that is quick at retribution for aggrieved parties.

That view is an unfair misconception, according to a son of Nogokpo and former Member of Parliament (MP) for Ketu South, Fiifi Kwetey.

According to him, far from being a place where deadly curses are placed on people, his hometown is a hub that delivers justice to aggrieved parties.

“To an extent, I think people do exaggerate about Nogokpo. People have this whole impression that it is a place where you go when you want to kill people.

“But not at all, it’s actually a place where, let’s say it this way, if you do anything that is wrong against people, they’ll give you an opportunity to make amends.

“If you steal somebody’s stuff and they report you, they’ll give you an opportunity to make amends and let your family know that you’ve been given an opportunity.

“But if you refuse, that is when these things come in because you’ve decided to reap your own desire. So I call it a place of justice,” he clarified whiles making comments on the YLeaderboard Series aired on Y107.9FM’s ‘Myd Morning Radio Show.’

He posited further that anyone who stands for justice in their daily activities is upholding the ideals of Nogokpo, using himself as an example.

“I fight for what is right, I stand for truth. I think if Africans can actually understand a bit more of those original values, the degeneration we’re seeing on this continent will not have been. I think the undercover of all these is for Christianity to simply oversee a complete degeneration of our society,” he said.

“A society where truth doesn’t matter anymore. Where people pretend to know God but it’s just a form of godliness but the substance is absolutely nothing. That is the fundamental reason this continent is having problems,” he added.

According to Wikipedia: Nogokpo is a small village located in the Ketu South Municipal of the Volta Region of Ghana along the Trans-West African Coastal Highway.

It continues: The history Nogokpo was founded by Torgbui Saba. He migrated from Agbozume Sukladzi and was one of the brave war captains of the Somey State.